Menopause What You Need to Know About Perimenopause & Birth Control

Ready to take the next step?

What You Need to Know About Perimenopause & Birth Control 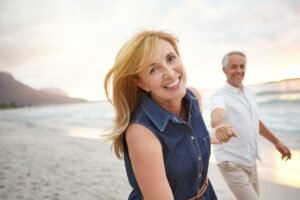 You may still need birth control during perimenopause to prevent pregnancy.

First, let’s clarify what we mean by “perimenopause.” The terms perimenopause and menopause are often used synonymously, but they are actually different stages of your life. Perimenopause is the time leading up to menopause. Menopause is when you have gone 12 consecutive months without a period.

During perimenopause, your hormones may start to fluctuate more, but you’re still producing a fair amount of both estrogen and progesterone. When you reach menopause and postmenopause, your ovaries produce very little of these hormones and stop releasing eggs. Perimenopause typically begins in your 40s. It usually lasts around four years before you reach menopause. However, this can be longer or shorter for different women, even up to 10 years or more. The average age for menopause is 51 years old, though it can come earlier or later.

Some symptoms of perimenopause include:

If you’re dealing with these symptoms, then it may mean that you’re starting the transition to menopause. You can talk to one of our treatment providers about your symptoms to determine whether you might be in perimenopause and how we may be able to help reduce or relieve your symptoms.

Can You Still Get Pregnant During Perimenopause?

As you transition into menopause, your hormone levels may fluctuate quite a bit. This can cause many symptoms that affect your quality of life, such as hot flashes and mood changes. Birth control can help regulate your hormones to reduce these fluctuations. This may, in turn, help alleviate some of your perimenopause symptoms.

How to Know if You’ve Transitioned to Menopause while On Birth Control?

So, if you take birth control during perimenopause and it can mask symptoms and even cause bleeding that mimics a normal menstrual period, how do you know if you’ve reached menopause? In most cases, stopping birth control can help you determine if you have reached menopause. Just keep in mind that until you are sure you have gone for one year without a period, you may need other forms of contraception, such as condoms, to help prevent pregnancy. Even if you have gone several months without a period, you may still be perimenopausal and still able to get pregnant. Talk to one of our treatment providers about your specific circumstances.

You might be wondering if there is a certain time you should stop taking birth control after you enter perimenopause. Once again, this is personal, so it’s important to discuss the specifics with one of our treatment providers.

However, many doctors do recommend some women stop birth control at the average age of menopause (51 years old) to determine if they’ve reached menopause yet. Also, it’s important to understand that with age, the risks of birth control can get higher. For instance, some hormonal birth controls can increase your risk for blood clots, stroke, breast cancer, heart attacks, and other health conditions. Therefore, our treatment providers may recommend stopping or switching hormonal birth controls based on your risks, even if you’re not in perimenopause.

What’s the Difference Between Hormone Therapy and Birth Control?

Hormone therapy and birth control have different purposes and do different things in your body. Therefore, one might be better than the other for your circumstances.

Generally speaking, birth control is primarily to prevent pregnancy (though you might also use it for other things like regulating your cycle, reducing PMS symptoms, or even to help with hormonal acne). Hormonal birth control typically contains synthetic forms of estrogen and progesterone that are much stronger than you would find in the average hormone therapy medication. Also, most forms of hormonal birth control override ovarian function, meaning they tell your ovaries to take a break while they provide the hormones instead.

Another question you have is whether taking hormonal birth control delays menopause. After all, if you might have fewer symptoms and might continue bleeding each month while taking the pill, that certainly sounds like you’re not in menopause. However, this is another common misconception.

Birth control doesn’t stop, delay, or turn back the clock on menopause. Menopause is the end of your reproductive years, meaning your ovaries stop releasing eggs and producing as much estrogen and progesterone. As far as we know, there is nothing we can do or take to prevent menopause from happening. So, while birth control might mask the signs and symptoms, it won’t make your ovaries continue to function as they did in premenopausal years.

Comprehensive Women’s Health Care from Our Providers at HerKare

Our treatment providers at HerKare are here to help you address your health and feel your best. We can help you make important decisions around birth control, health risks, and symptom relief during and after menopause. Our team is dedicated to providing high quality women’s health care at every stage of life. Make an appointment today to learn more and discuss your health with one of our medical providers.